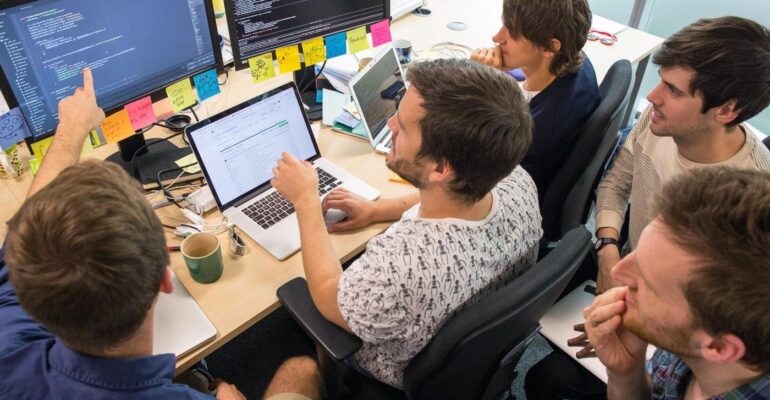 Similar to Pair Programming, there’s another approach to software development called Mob Programming. It’s very common for a team to start doing it when somebody wants to show something to the whole group.

What is Mob Programming?

Mob Programming is a software development approach where the whole team works on the same thing, at the same time, in the same space, and at the same computer. In addition to software coding, a Mob Programming team can work together to do almost all the work a typical software development team tackles, such as defining user stories or requirements, designing, testing, deploying software, and working with the customer and business experts. Almost all work is handled in working meetings or workshops, and all the people involved in creating the software are considered to be team members, including the customer and business experts. It also works for distributed teams in the same virtual space using screen sharing. It leverages the knowledge of the entire group to make faster, better decisions. This increases the productivity of the team and the quality of their output. Mobbing also encourages cross-training and the sharing of perspectives across functions, which improve collaboration and job satisfaction.

Mob Programming is a great way to intensively increase the learning about the code within a team. Pair Programming works similarly, with this approach the number of eyes multiplies and so does the feedback. Because an entire team is working on the same code at the same time, no time is spent on merging code, so they exchange a long list of tips, tricks and alternative approaches to coding. Truly working together can improve the sense of shared ownership, so the value is also growing up considerably.

Check out Woody Zuill’s presentation that was recorded at GOTO Copenhagen back in 2017: